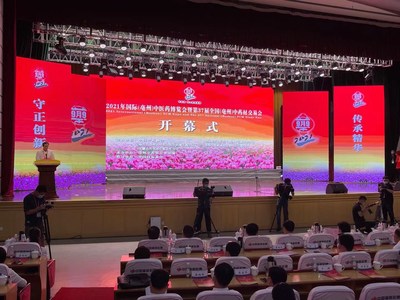 The expo, held both online and offline, will stage four key sessions on trade development, cultural exchange, and academic communication of the TCM, with inheritance and innovation as keywords.

Aiming at building itself into a global TCM center, Bozhou has been making efforts to make the TCM industry more industrialized, modern and internationalized, with a current market value of 145 billion yuan (about 22.50 billion U.S. dollars) and more than 200 medicine production enterprises, said Du Yanan, municipal party secretary of Bozhou, at the opening ceremony, adding that the city will take the TCM industry as a priority in the city’s development, borrowing the country’s policy preference, such as the integrated development of Yangtze River Delta and the high-quality development of the China’s central part.

Bozhou has successfully hosted 36 TCM trade fairs since 1985, making great contributions to the spread of Chinese TCM culture, the development of TCM industry and the international exchanges and cooperation in the field of TCM, said Ma Jianzhong, chairman of the World Federation of Chinese Medicine Societies (WFCMS).

The unveiling ceremony of nine key projects was also held during the expo’s opening ceremony.

The expo is co-hosted by the China Association of Traditional Chinese Medicine, the Beijing Tong Ren Tang Co., Ltd. and three other industrial players.