TYSONS, Va., September 10, 2021 /PRNewswire/ — Tonight, in honor of those who were impacted by and responded to the terrorist attacks of September 11, 2001, PenFed Credit Union hosted an evening of remembrance and saluted today’s heroes serving in defense of our nation and communities at the Mandarin Oriental Hotel in Washington D.C. 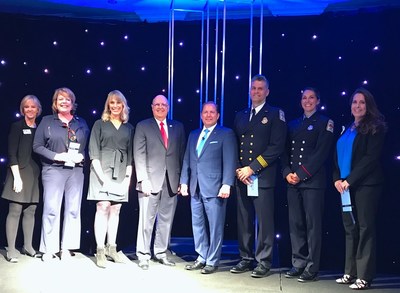 James Schenck, President/CEO of PenFed Credit Union and CEO of PenFed Foundation, was working at a PenFed facility in Alexandria when he saw the news of the attacks on 9/11/2001. Schenck and several volunteers walked six miles to the PenFed financial center at the Pentagon to see how they could help the team and others who were immediately impacted.

«As we ran toward the Pentagon, I’ll never forget what we saw:  In the aftermath of the attacks, we saw the best of America – the selflessness and courage of the American people, moving toward the burning Pentagon building to help others survive,» said Schenck during his remarks. «These brave Americans were not only first responders and military personnel; they were everyday civilians who were in the area, coming out of the Pentagon City Mall, stopping their cars on South Hayes Street and heading toward the burning Pentagon to assist in any way they could.»

All PenFed financial center employees at the Pentagon on 9/11 were able to evacuate safely, and the credit union reopened for business the next day to provide continuous service and support to the Pentagon community.

«That morning we were on a one-way mission and if successful, we wouldn’t be coming back. We were mission failure. The passengers on Flight 93 are the true heroes,» said keynote speaker, Heather «Lucky» Penney, an American hero and renowned speaker most widely recognized for her service as an F-16 fighter pilot on 9/11. «I’ve come to learn that heroism isn’t something unique or possessed only by a chosen few. The passengers on Flight 93 proved that and so did the people that helped each other moments before the towers fell.»

Retired Army General John W. Nicholson Jr., President of the PenFed Foundation, was moving into a new house that day. His desk in the Pentagon was 100 feet from where the nose of the plane hit the building. «Everyone between my desk and the plane perished. You don’t forget something like this. It stays with you forever. What I do every day, I do now in honor of those people we lost,» he said during his remarks.

This year in honor of the 20th anniversary, PenFed is partnering with the Military Women’s Memorial to support the 9/11 Remembrance Relay. This week the 9/11 Remembrance Relay is paying tribute to the victims of the 9/11 terrorist attacks, and the 177 servicewomen who died in combat zones since, with a 177-mile walk from the Flight 93 National Memorial in Shanksville, Pennsylvania, to the Military Women’s Memorial at Arlington National Cemetery.

Founded in 1935 as the War Department Credit Union, PenFed’s core membership is comprised of members of the national defense communities and all who support them. Following the attacks of 2001, PenFed launched the PenFed Foundation to support service members, veterans and their families. The PenFed Foundation has delivered over $40 million in support to over 150,000 members of the military community through programs providing financial education, credit-building, homeownership, short-term assistance and veteran entrepreneurial support services. To learn more about PenFed’s history, visit penfed.org/about-penfed. To learn more about the work of the PenFed Foundation, visit penfedfoundation.org.

About PenFed Credit Union
Established in 1935, Pentagon Federal Credit Union (PenFed) is America’s second-largest federal credit union, serving 2.4 million members worldwide with over $28 billion in assets as of July 31, 2021. PenFed Credit Union offers market-leading certificates, checking, credit cards, personal loans, mortgages, auto loans, student loans, and a wide range of other financial services. Our mission is to empower members of our community to achieve their financial well-being. PenFed Credit Union is federally insured by the NCUA and is an Equal Housing Lender. To learn more about PenFed Credit Union, visit PenFed.org, like us on Facebook and follow us @PenFed on Twitter. Interested in working for PenFed? Check us out on LinkedIn. We are proud to be an Equal Employment Opportunity Employer.