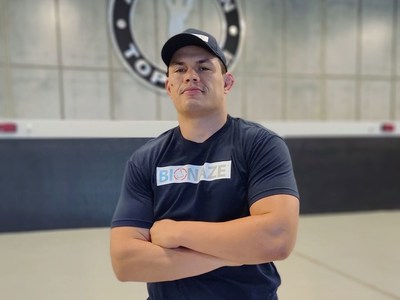 Golm 28, a veteran of the UFC, gave Bionaze «two fists up» after the Brazilian mauler incorporated it into his routine.

Golm 28, a veteran of the UFC and now a top seeded Bellator Heavyweight gave Bionaze «two fists up» after the Brazilian mauler rapidly incorporated it into his daily routine.

«This collaboration with Bionaze felt like a very organic move. It actually tastes like candy and it changed my life,» said Golm. «I’ve been suffering with sinus and ear problems for most of my life, and sometimes this makes it difficult to train. Since I have been taking Bionaze twice daily, for about a month, and in the last few weeks… zero problems, it’s amazing» said Golm.

Bionaze is a cutting-edge probiotic containing two clinically studied and patented probiotic bacteria strains (BLIS K12 and BL-04) Studies have proven them to be effective in reducing and eliminating the negative effects of chronic ear nose and throat and sinus issues. BLIS K12 & BL-04 are both patented and clinically proven to target the sinus, nose and throat to support nasal airways and general health.

Bionaze is founded by former athlete and entrepreneur Steve Williams to improve and maintain a healthy balance of bacteria in the upper respiratory area.