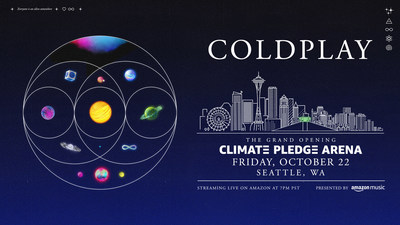 A dazzling rooftop light show revealed that the band will play its first arena show in nearly five years on Friday, October 22nd to officially open Seattle’s new home of live music and events. The show takes place exactly one week after the release of Coldplay’s hotly anticipated ninth album, Music Of The Spheres, which is out October 15th (and available to pre-order at cldp.ly/MOTS). The concert will be produced by Live Nation.

Support will come from Grammy-nominated twin sisters, We Are KING, who are also featured on the band’s upcoming album.

Tickets will go on sale on Wednesday, September 15th at 10 a.m. PST for this one-time-only concert. Amazon Music is also bringing the show to fans around the world through a livestream on Prime Video for all customers with or without a Prime membership; on Twitch;  and on the Amazon Music app.

In June 2020, Amazon secured the naming rights to the arena and elected to call it Climate Pledge Arena as a regular reminder of the urgent need for climate action. The arena will be the first net Zero Carbon Certified arena in the world operating on 100% renewable energy. It will also be a functionally zero waste building from day one and will be eliminating all single-use plastics by 2024.

«We’ve embarked on what some may say was an impossible journey to turn this historic landmark into a world-class net Zero Carbon certified arena that’s first of its kind,» said Tim Leiweke, CEO of Oak View Group. «This is why we’re so excited to have Coldplay who wholeheartedly believes in and supports sustainability efforts, be the first to play in the building for what will be a night to remember.»

This event will also be utilizing Ticketmaster Verified Fan platform. Fans can register HERE now through Sunday, September 12th at 9 a.m. PT. Registered fans who receive a code will have access to purchase tickets before the general public on Tuesday, September 14th from 12 p.m. PT through 11 p.m. PT.

«Last year, Amazon secured the naming rights to the historic arena originally built for the 1962 Seattle World’s Fair, and named it Climate Pledge Arena as a regular reminder of the importance of fighting climate change,» said Kara Hurst, vice president of worldwide sustainability at Amazon. «We are excited to see this building come to life as a beacon for climate action, and look forward to welcoming Coldplay for a special night filled with hope and optimism.»

The concert will be the first public show at Climate Pledge Arena as a part of a weeklong opening celebration across the Seattle Center Campus. Other opening week festivities include:

Additional opening week details and events will be shared in the coming month.

About Climate Pledge Arena
Climate Pledge Arena, located at Seattle Center, is the complete redevelopment of a historic landmark, originally built for the 1962 Seattle World’s Fair. It will be an industry first, including being the first net zero certified arena in the world. Home to the NHL’s Seattle Kraken, WNBA’s Seattle Storm, and the world’s biggest performers of live music and events, Climate Pledge Arena will open in October 2021.

Climate Pledge Arena will serve as a long-lasting and regular reminder of the urgent need for climate action. The Climate Pledge, which was founded by Amazon and Global Optimism in 2019, is a commitment from companies globally to be net zero carbon by 2040. Visit climatepledgearena.com