LONDON, Sept. 27, 2021 /PRNewswire/ — On 1st October, Isle of Man Post Office will issue a set of stamps celebrating the 75th anniversary of Mensa. They feature puzzles, codes and cyphers, and a global first, what3words references. The Issue was approved just before life President of Mensa Sir Clive Sinclair passed away. 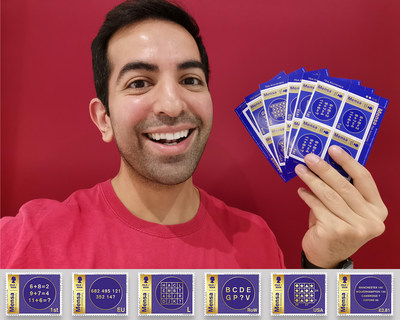 The collection, designed by Glazier Design, has received Royal Approval from HM the Queen. The puzzles contain logic and non-verbal reasoning, and also many secrets hidden in microtext and cyphers, special codes that disguise words, making the message secret. Codebreakers need to work out the key to solve the cypher, but they might need a magnifying glass!

In a global first, the stamps contain what3words references. what3words is the simplest way to talk about and share location. The app divides the world into 57 trillion 3 metre squares and gives each square a unique combination of three random words: a what3words address.

The collection was developed in collaboration with Mensa, a global organisation with145,000 members in 100 countries, including the Isle of Man the UK. At a time when neurodiversity is more recognised in society, Mensa embodies togetherness through their motto ‘Where everyone is different, so no-one is’.

British Mensa Chief Executive Cath Hill, «Mensa’s 75th anniversary is a huge milestone for the society, and we are delighted that the Isle of Man Post Office has chosen to celebrate it with us by issuing this beautiful set of stamps.»

Maxine Cannon, GM IOMPO Stamps and Coins, «When the idea to celebrate the 75th anniversary of Mensa was first mentioned by my colleagues Paul Ford and Charlie Jordan, I couldn’t imagine how we would illustrate the Mensa story, but under the capable skills of Glazier Design and Emma Cooke of EJC Design, plus boundless enthusiasm from the Team at Mensa UK, the final results are a real credit to everyone involved in this postal tribute.»

Chris Sheldrick, CEO and Co-founder of what3words adds: «It’s a real honour to mark Mensa’s 75th anniversary in a world’s first – what3words addresses on royally approved stamps! Mensa is a celebration of neurodiversity in society, and this stamp collection is a perfect tribute. We hope that people enjoy working out exactly where the what3words addresses are and why they’re so significant to Mensa and the Isle of Man.»